On 19th April a dashcam recording of a large fireball in the Murmansk region video made international headlines. While an infrasound analysis gives a good estimate of the area where the fireball fell, photographic evidence has the potential of providing better accuracy. There also exists another dashcam video of this fireball, but it’s recorded from a countryside road with no usable landmarks or references. Further away in Finland there is direct photographic evidence from Kuusamo and Mikkeli. The Kuusamo image is promising, but it still requires some careful analysis. Finnish fireball watchers are on the case.

Meanwhile, let’s find out what the dashcam video can tell us. This task is actually quite fun. It’s amazing how efficiently it can be done with the help of Internet. There is no need to book a flight to Murmansk and bring a theodolite.

The video was widely reported in international news as recorded in Murmansk, but skimming through Russian commentary quickly revealed that it was in fact recorded in Snezhnogorsk, an hour’s drive north of Murmansk. Which is good news, since finding the correct street in a large city like Murmansk in a country where all apartment blocks look pretty much the same is no easy task even with useful tools like Google Earth. Snezhnogorsk is a small place with only a few streets, and we already know the general direction that the driver had to be going. 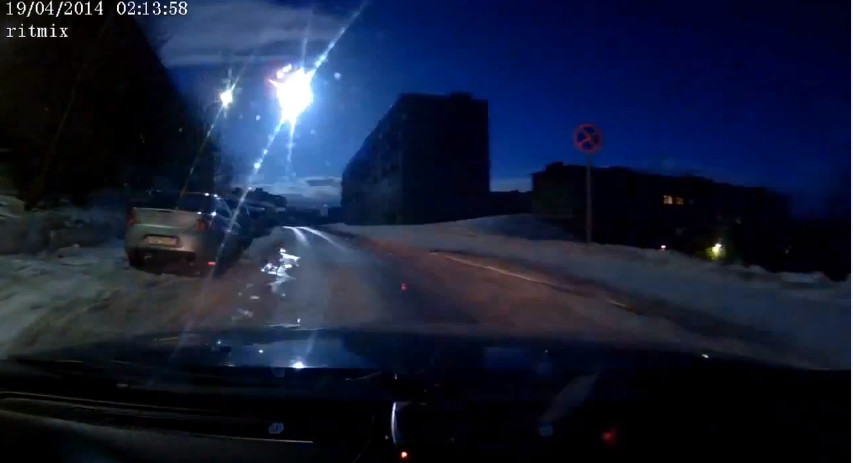 The video was recorded from this position: 69.195N 33.2416E. The next task is to find the positions in the sky where the fireball was first seen and where it disappears. The first and last parts of the path across the sky are obstructed by buildings, but this is not critical and most of the fall is visible anyway. In fact, the buildings become useful references.

Google Earth provides imagery from different dates. I found an image dated 2005-07-07 most useful. The image is among the sharpest, and the buildings cast clear shadows. The shadows reveal that the azimuth of the sun is about 179 degrees. From that we can conclude that the image was taken at about 09:49 UTC, and we can then calculate the altitude of the sun: 43.4 degrees. To calculate how tall the buildings are, we then just need to measure the lengths of the shadows. The building on the left side of the road obstructing the first part of the fireball path is approximately 21 metres tall, and the building on the right side obstructing the last part is approximately 22 metres tall. I’m assuming that the ground is slightly downhill towards the right. 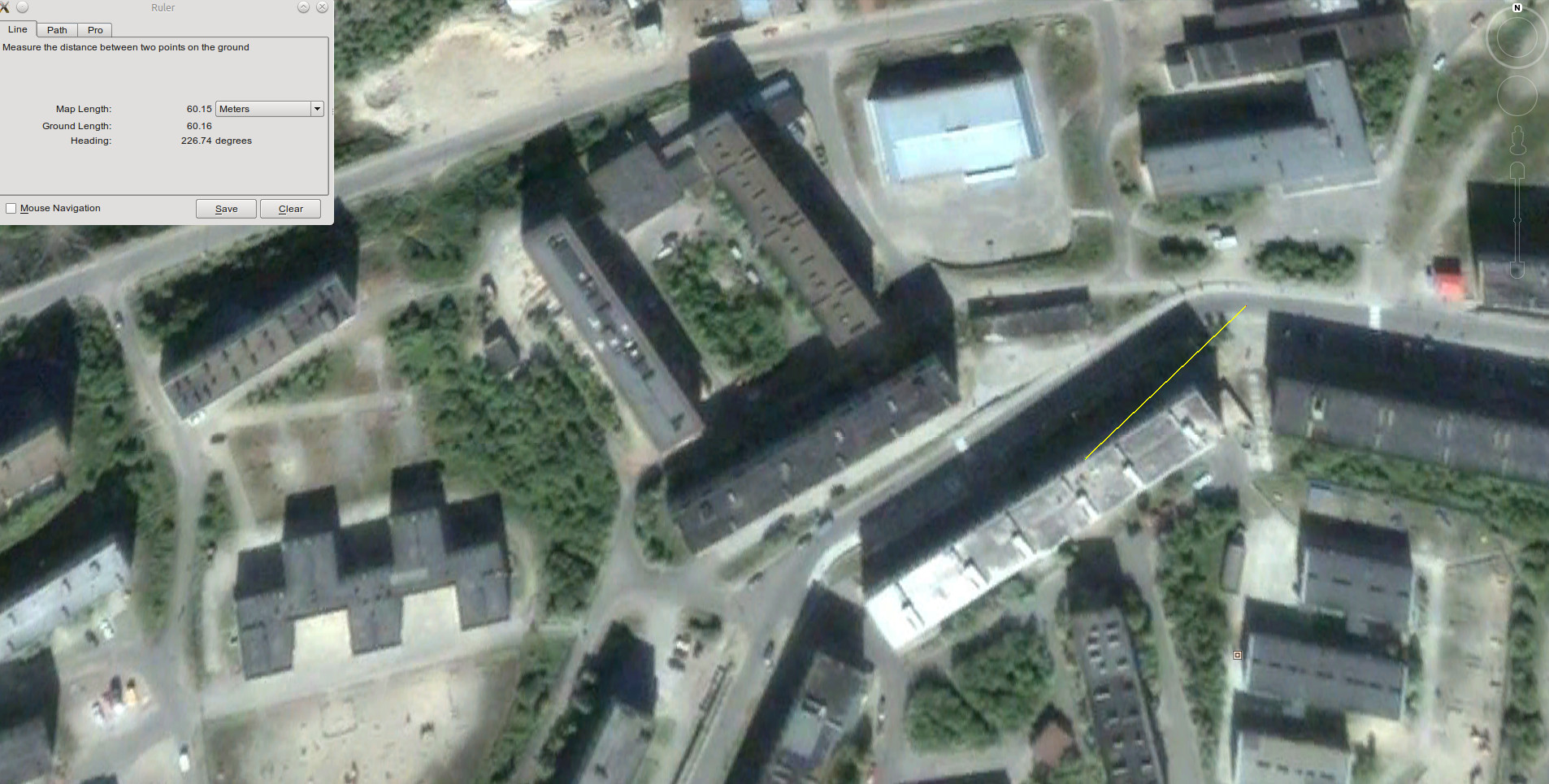 We’re finally equipped with what we need to estimate both the azimuth and altitude of the fireball. My best estimate is:

The main challenge is to estimate the exact point over the roof of the buildings where it appears and disappears. It seems to appear over the building at a point about 60 metres away (across the ground). Since we know how tall the building is, we can then also estimate how far up in the sky the fireball is. The distance to the building where it disappears appears to be about 115 metres. We have to allow an uncertainty of a couple of degrees for these estimates, possibly more for the altitude. I invite anyone to check these calculations and improve the estimate. There are many sources of potential errors (date and time of imagery, calculations, etc), and alternative approaches are also welcome. Since the angles towards the buildings are very shallow, the distances used to the buildings are critical as they will influence altitude a lot. But we must assume a near 1:1 pixel aspect ratio, and then the solution space narrows somewhat down. 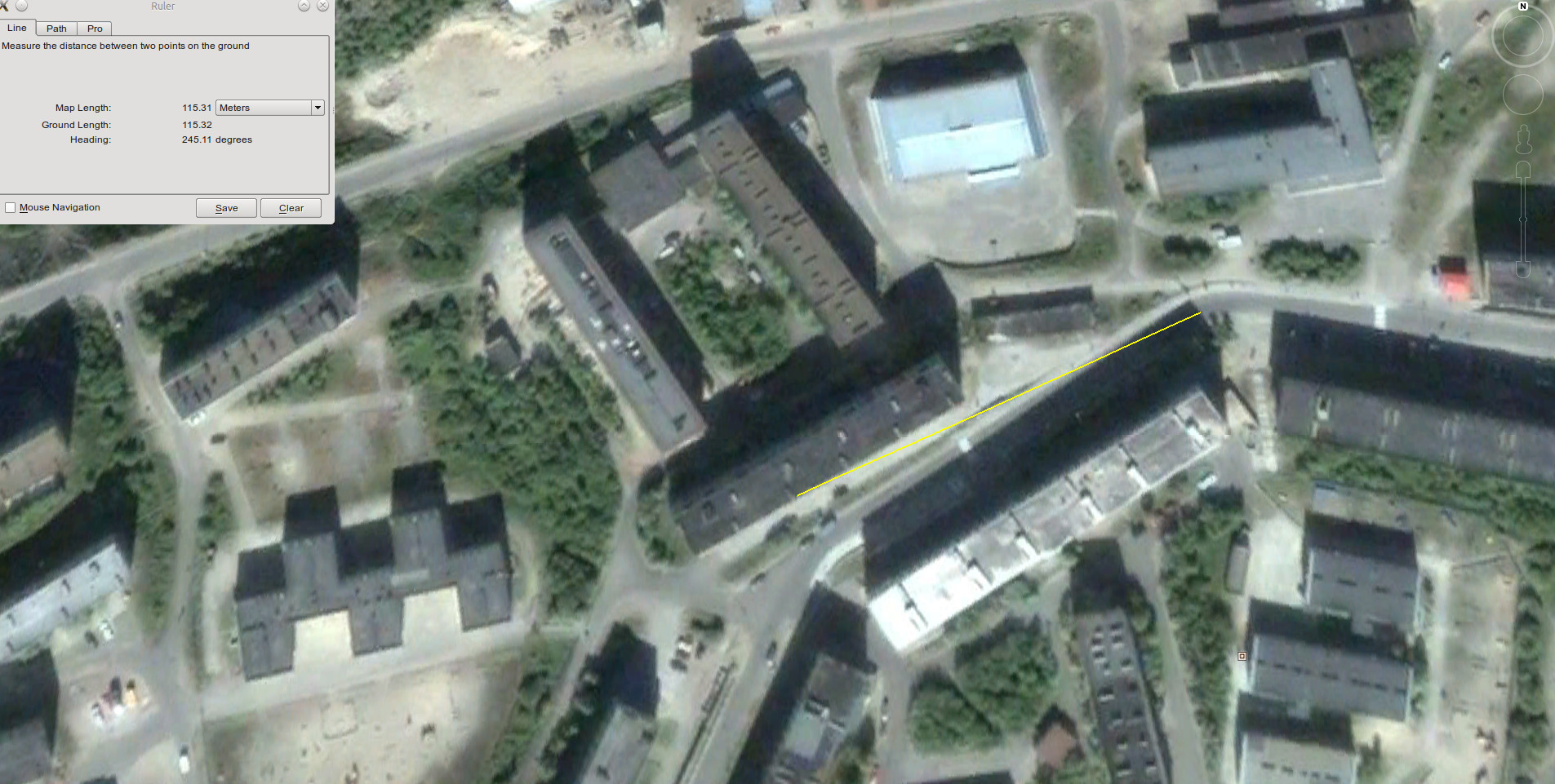 These estimates agree well with the NORSAR infrasound analysis and many eyewitness reports from Norway and Finland. The photographic evidence from Finland will hopefully be enough to give a pretty good estimate of the debris zone for meteorites. It’s a difficult area to search in, though. It’s covered by much birch and pine forest, there are many lakes and few roads. Snow still covers the ground but should clear in early May. Whether that is good or bad for a search is hard to say. It seems very likely that many fragments of this fireball have reached the ground, but I’m less optimistic about anyone actually recovering one. The exact location where to expect fragments is yet to be determined, but an area about 30 km northwest of Verkhnetulomskiy seems interesting. Yandex Maps show some large open cultivated fields in the area.

Update: The Finnish photographic evidence did show that the cultivated area is within the debris field, and this was precisely where two fragments were found (on 29th and 30th May). It’s almost certain that more fragments exist, but for the most part they will be in a forested area and extremely hard to find.